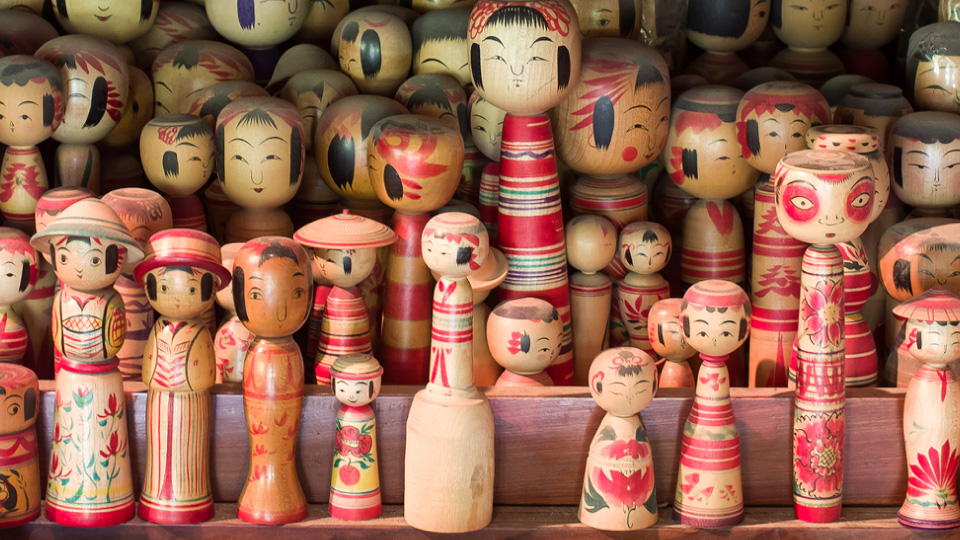 “One of a kind” wooden doll becomes a big boom!

The origin of the Kokeshi doll is a mystery. It has been said that the Kokeshi doll started in the Tohoku district in the late Edo or early Meiji period, but there are various opinions about the birthplace. The wood crafters of the mountainside villages made it as a toy for children, and the dolls have unique designs and features rooted in each region.
There are two types of Kokeshi doll, one is the "original kokeshi doll" made in a free-style, not specific to a region, and the other is the "traditional Kokeshi doll" which is designed according to a traditional style that is specific to particular regions.
The traditional Kokeshi dolls are created according to 11 styles, based on the following regions: Tsugaru (in Aomori), Nanbu (in Iwate), Kijiyama (in Akita) , Zaotakayu, Yamagata(in Yamagata), Hijiori (in Yamagata and Miyagi), Naruko, Sakunami, Togatta, Yajiro (in Miyagi), Tsuchiyu (in Fukushima). The styles give each Kokeshi doll a characteristic look representing the region.
The Kokeshi doll artisans create the doll’s the face according to a basic design, but as the personality of each artisan varies, so do the faces of each doll. Furthermore, the faces of Kokeshi may be different depending on the condition or weather of the day in which the artisans create the dolls. Each Kokeshi doll is truly “one of a kind,” which is its main attraction to many people.
The wood used to make Kokeshi dolls are from Cornel, Mono maple, Cherry trees and Pagoda. Trees are cut and dried during winter time, and artisans continue to dry them enough to shape them on a potter's wheel with a plane or a knife, called Bankaki. The artisans then draw the Kokeshi’s face and body, then apply wax on it. Kaname Fukazawa, writer of children’s books, and known as a huge Kokeshi collector, said "Kokeshi itself seems to be the people in Tohoku (northeastern)." While having a simple charm, Kokeshi has spread from its regional roots to become a big boom all over Japan.