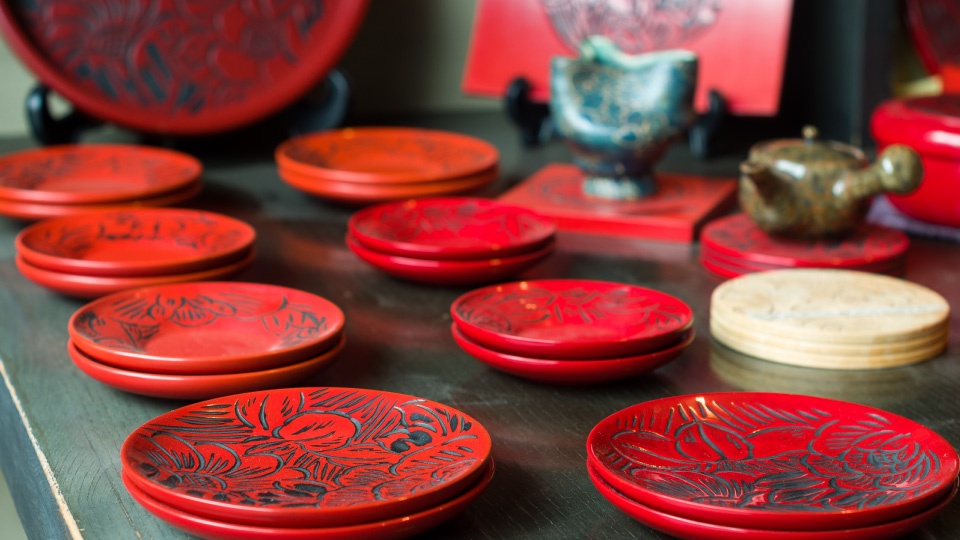 The Tsuishu is a practical lacquer ware which is sculptured, polished and coated with Japanese lacquer by the dedicated hand work of a craftsman.
The technique of Tsuishu is carving patterns on lacquer ware thickly coated with red lacquer. Another variety of lacquer ware called Tsuikoku is coated with black lacquer, and Tsuiou is coated with yellow lacquer.
This technique came to Japan from China between the Kamakura period (1185-1333) and Muromachi period (1336-1573). After its arrival in Japan, the technique of using a red lacquer coating applied to wooden ware became known as Tsuishu.
The technique of Sendai Tsuishu was developed by craftsman, Einojo Kawasaki from Murakami, Niigata Prefecture during the Meiji period (1868-1912).
Mr. Kawasaki created a technique called Toka-Tsuishu, which is covering wooden material with the precise relief made with a mold. His crafts were widely available and known as a lacquer ware which is strong and easy to use. Later, Tadashi Minami continued the work and technique of Kawasaki which became known as "Sendai Tsuishu". Tadashi Mimami had worked for the National Tohoku Craftworks and after World War II, he started Sendai Tsuishu Workshop. Now extending into the third generation, Tadashi Minami’s grandchild continues the tradition of crafting the lacquer ware.
Sendai Tsuishu has been crafted and developed over approximately 100 years, and has notably won a “Good Design Award 2011”. This lacquer ware which is loved as souvenirs is also loved for its enduring style and quality.